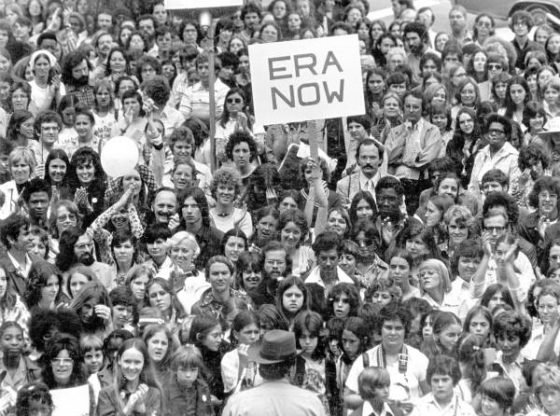 TALLAHASSEE — In the 1970s, Congress passed the Equal Rights Amendment and then sent it to the states for ratification. By 1977, 35 of the required 38 state legislatures had voted to ratify the proposed constitutional amendment — but one of the holdouts was Florida.

Now, 37 years after the final vote when the Florida Senate rejected ratifying the ERA, legislation has been reintroduced in the Sunshine State to reverse that decision. And since two other states, Nevada and Illinois, recently joined the initial 35 that had ratified it in the 1970s, approval by the Sunshine State means the ERA could finally get added to the U.S. Constitution.

On Monday, supporters of the measure will hold a press conference in Tallahassee at 11 a.m. to discuss their efforts to get it approved here. Measures have been introduced by state Rep. Dotie Joseph, D-N. Miami, and state Sen. Audrey Gibson, D-Jacksonville, to do just that.

Similar measures have also been introduced in other holdout states, including Virginia, North Carolina and Georgia.

Now the question is, can the ERA pass in the Florida Legislature nearly 50 years after Congress first approved it?

What’s the History of The Equal Rights Amendment?

Although the concept of a constitutional amendment that banned discrimination on the basis of sex was first introduced in the 1920s, it wasn’t until the 1960s that the efforts began to gain popular support in Congress. The measure was approved by the U.S. House of Representatives on Oct. 12 1971 and then on March 22, 1972 by the U.S. Senate, then sent to state legislatures for ratification, with a ratification deadline of March 22, 1979. At first, it looked like a safe bet to be approved, and by 1977 the ERA had the support of 35 states.

But that turned out not to be the end of the story.

The issue got revived in March 2017 — ironically, the 45th anniversary of Congress’ submission of the ERA to the states — when the Nevada Legislature became the first one to ratify the ERA since the mid-1970s.

A year later, the Illinois General Assembly ratified the ERA on May 30, 2018.

That brought the number of states ratifying this proposed constitutional amendment to 37 — one short of approval.

What is the History of the Equal Rights Amendment in Florida?

In the 1970s, the Florida Legislature was heavily dominated by Democrats — but at the time, there were plenty of conservative and rural Southern Democrats who were social conservatives, and not as many liberals. Throughout the 1970s, Florida became one of the ERA battleground states, with the measure being introduced in every legislative session between 1972 until 1982. It did manage to pass the Florida House several times, but never won in the state Senate.

In 1982, Florida lawmakers cast their final vote on the issue. The ERA was approved by a 60-58 vote in the House, and the vote was 22-16 against ratification in the Senate.

Today the Florida House and Senate are controlled by Republicans, and Gov. Ron DeSantis is also a Republican.

Twenty-five states have adopted state constitutional amendments stating that equal rights under the law can’t be denied on the basis of sex, but Florida isn’t one of them.

However this is the tenth time Florida lawmakers have introduced legislation to ratify the ERA in Florida since 2007, without success.

Supporters of the ERA have also argued there is no statute of limitations on states ratifying the amendment because the initial deadline, set by Congress, wasn’t a part of the original language of the amendment itself. Other legal scholars believe Congress has the ability to waive the deadline.