Despite its small size, Tavares becomes a hub for intermodal travel. 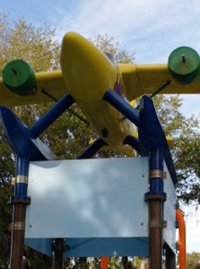 TAVARES — Think inter-modal transportation hub, and you probably think Jacksonville or New Orleans, maybe closer to home in Tampa or Orlando – but not little old Tavares.

And yet, Tavares has all the ingredients to become just that.

This Lake County city has trains, planes and boats — including two water taxis.  And while the Lake County public bus system is not extensive, it does exist.  The focal point of it all is the seaplane base and marina in downtown Tavares.
On a visit earlier this month, there were a handful of amphibious flying boats and float planes on the ramp, several float planes on the shore,
dozens of boats (mainly pontoons) at the boat slips, the odd speed boat on the lake, the occasional pedestrian-with-dog on the walkways, a fair amount of traffic at the restaurant on site, and on the veranda of the two-story wooden “Prop Shop,” an off-duty pilot was relaxing in the sun, playing his “axe,” and singing along.

Greg “Coop” Cooperman plays a mellow accordion and a mean jazz harmonica, and does not have a bad singing voice. A resident of Alaska, Cooperman says, “I’m here to fly seaplanes in the warm weather.”

Around the corner, on another rocking chair, facility manager Captain John Ruggeri took in the scenery and noted, “I have the best office in the world …
I’ve been blessed.”

Reflecting on the impact seaplanes are having locally, Ruggeri say that at the nearby restaurant, whenever a seaplane lands or takes off, “everything
stops.”

At this point, there are not a lot of seaplanes at Tavares.  Ruggeri says that the busiest “normal” day they’ve had was 14 planes “on the
ramp,” and that opening day on April 10, 2010, they had 48.

The facility has two water taxis, obtained as a federal grant. At this point, the taxis only operate during special events, providing a scenic way to travel
between the cities of Tavares and Mount Dora, both on Lake Dora. There isn’t yet the demand to make regular runs between the two cities.  The train tracks run right by the seaplane base.  Right now, the only train traffic is the occasional excursion, run by the Eustis-based Florida Rail
Adventures.  The tracks themselves, however, are central to a plan to run commuter rail from Orlando into Lake County, along the U.S. 441 corridor.

The story of the Tavares Seaplane Base & Marina started in 2004, with the shuttering of a large citrus packing plant on Lake Dora in downtown Tavares.  With all that waterfront real estate opening up, city officials got creative in their search for ways to revitalize downtown.  Searching for a niche, they became “America’s Seaplane City.”

The “Prop Shop” is housed in a replica of the 1871 Woodlea House.  The original, considered one of Tavares’ most important historic structures, was destroyed by arson in 2007.
For more information about activities at the seaplane base, visit the city’s Website at www.tavares.org.

At Air Orlando, safety is at a premium.
Sen. Nelson wants to crack down on inmate tax scams.